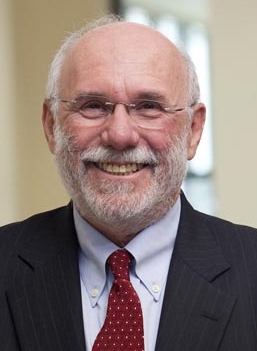 Myron M. (“Mike”) Levine received his MD from the Medical College of Virginia in 1967 (where he was a member of the Alpha Omega Alpha medical honor society) and went on to become Board-certified in both Pediatrics and Preventive Medicine. He studied Tropical Public Health at the London School of Hygiene and Tropical Medicine and received a DTPH in 1974. In that year, he also co-founded the Center for Vaccine Development (the CVD) at the University of Maryland School of Medicine. He has devoted his career to accelerate the development and introduction of vaccines against infections that pose a great burden on children and adults in developing countries (e.g., Shigella, typhoid fever, cholera, diarrheagenic Escherichia coli, malaria). In 1979, as a Pan American Health Organization consultant, he assisted Dr. Jose Manuel Borgoño in establishing the Typhoid Fever Control Program in the Ministry of Health of Chile and served as advisor to the Program until the early 1990s. CVD-Chile, a field unit of the CVD was established as a formal juridical public health research entity in Chile in 1991. Under his leadership, another field unit, CVD-Mali, was established in Bamako, Mali, West Africa; collaborating with Malian physicians and investigators, this unit serves as a public health research arm of the Malian Ministry of Health. At the University of Maryland School of Medicine he has served since 1984 as Professor and Head of the Division of Geographic Medicine in the Department of Medicine and from 1985 to 2006 as Professor and Head of the Division of Infectious Diseases and Tropical Pediatrics in the Department of Pediatrics.

Mike Levine has authored 461 papers in peer reviewed scientific journals and more than 100 book chapters. He is Chief Editor of “New Generation Vaccines”, the leading textbook of research vaccinology; the 4th edition of will be published in 2008. He has been highly successful in receiving large grant awards from the NIH and the Bill and Melinda Gates Foundation. Some recent grants include $50 million from the NIH as Principal Investigator of a Regional Center of Excellence, $20.4 million from the Gates Foundation to develop a new measles vaccine for immunizing infants in developing countries who are too young to receive the current measles vaccine and $29 million from the Gates Foundation to study the burden and etiology of diarrheal disease in eight sites in sub-Sahara Africa and South Asia.

He has received many honors acknowledging his research contributions. To cite a few, he was elected a member of the American Society of Clinical Investigation (“the Young Turks”) (1986), the American Association of Physicians (“the Old Turks”) (1993) and the American Epidemiological Society (1982). In 1995 he was elected to the Institute of Medicine of the National Academy of Sciences and in 1998 he received the Albert B. Sabin Gold Medal Award for lifetime achievement in the field of vaccinology. Based on his vaccine research, in 2000 the Institute for Science Information recognized Dr. Levine as one of the top 100 most highly cited, influential researchers in the field of immunology. Since 2003, he has served as Principal Investigator of the Middle Atlantic Region Center of Excellence for Biodefense and Emerging Infectious Diseases Research, a $50 million NIH-funded consortium that includes > 60 investigators from 16 medical schools.

Mike Levine has served as President of two national societies, the American Society of Tropical Medicine and Hygiene (2006) and the American Epidemiological society (2001). He has also received multiple honors for his public health and humanitarian efforts. Among these are the Rank of “Grand Officer of the National Order of Mali” presented on behalf of the President of Mali, His Excellency Amadou Toumani Touré, for efforts in developing and distributing vaccines to the children of Mali. This honor is traditionally bestowed only to heads of state; (past recipients include U.S. President Jimmie Carter and President Jacques Chirac of France). In the January 2002 issue of Baltimore Magazine, Myron Levine was featured as one of ten “Baltimoreans of the Year”, an honor bestowed in recognition of improving the way of life in Baltimore in 2001; (another recipient that year was baseball hall of fame inductee Cal Ripken, Jr.).

Dr. Levine is a tireless provider of service to the international community in the area of public policy on immunizations and on strategies to foster the development of vaccines against diseases of particular importance to the developing and tropical world. He has served on multiple World Health Organization committees and advisory groups and repeatedly as an advisor to the Bill and Melinda Gates Foundation, the Rockefeller Foundation and the National Institutes of Health. He served as a member of the initial Working Group of the Global Alliance for Vaccines and Immunization (GAVI), 1999 –2002 and as Co-Chair of GAVI’s Task Force on Research and Development. He also serves on a Board of the Institute of Medicine and on multiple IOM committees (and during the past 12 months has Chaired two Institute of Medicine Committees).

Two recent phenomena, “emerging infections” and bioterrorism, have underscored the importance of the area in which Mike Levine carries out research. The general public, as well as scientists and health professionals have come to recognize that the world’s human population comprises a “global village”, and that most pathogens have global reservoirs that do not respect national borders.